“There are no secrets that time does not reveal.”- Jean Racine

As a kid growing up on the Borneo side of Malaysia, Melaka was stuff of legends. The Sultanate and legendary heroes were definitely the crux of any Malaysian history. The famed city of red buildings was supposed to be enthralling, like a step back into the glory of yesteryear.  However, anyone’s a fool to believe a city wouldn’t change with times, without reflection of the present.

Admittedly, Melakan’s society, in extension, the Peninsular part of Malaysia has always been a foreign land to me. Unlike my childhood home, the life that passed by here was touched by an eclectic mix of Arab and Chinese trades as well as European colonisation. Some considered this a gift, some a curse of the Strait. I, for one, thinks that it is a gift, a gift of time, a unique one for the city.

The most obvious Melakan legacy (and my very first knowledge of the city ) was the Peranakan culture. With  TV being my super-powered babysitter, I remember how the Baba Nyonya show tickled Little Miss Hoggy. I remember little me was very fascinated by the grandma’s (Nyonya) speech: a creole of Malay, Hokkien Chinese and English. But watching it on the telly isn’t quite the same as experiencing it.

Twas Chinese New Year and I reckon that is the best time to visit the city.  You’ll hear the drums beating and fire crackers from the lion dance amidst the traditional decoration of everything red. Have a gander at the Baba and Nyonya Heritage Museum and you’ll be treated like how a guest would be treated during the celebration. Cue yummy coconut cookies and tidbits! 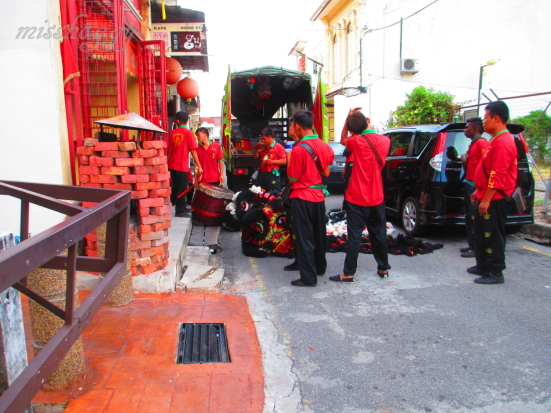 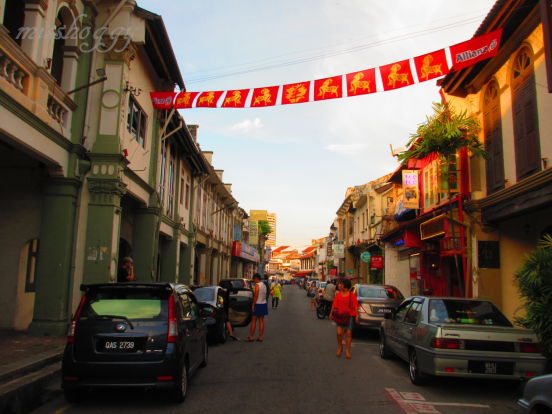 A criss-cross between the Chinese and the local Malay culture could blow some people off and called it an abomination and a dilution of cultures, at least it was like that back then when. But the 500-year-old Peranakan culture is anything but. If anything this culture of the Strait did was take the best of both worlds and accentuated the awesomeness.

Case in point: Malay spices and noodles from Chinese.

As expected, the streets of Melaka are strewn with historical buildings. The Portuguese made their mark, the Dutch literally painted the town red, and the British decided that the city should be illustrated with English instead of Dutch. Despite how ugly colonisation was, these buildings are considered the birthmarks of the city, altered into beauty marks of sort as time passed.

As attractive as the city is, I couldn’t find myself immerse in it, not especially when I encountered the transformation of some of the buildings of the Stadthuys. I love the night markets at Jonker Street, the journey back in time in the museum, and the delicious honest cooking at Nancy’s Kitchen, but I couldn’t ignore some arrogance showcased throughout the city. Some part of the Stadthuys were transformed into a museum of the corrupted Malay branch of the ruling party (as known as U**O), instead of preserving it as a historic site. It was then I realised that it was time for a modern government to make its claims.

The museum was something really ugly, that I can’t fathom to take a picture of it.

Forgive me of what it sounds like a harsh judgement of the city, but I couldn’t help it. The Malaysia of my childhood was a epitome of harmony and tolerance. However, what I saw was a country slowly becoming divided in her oldest multi-cultural city. Anyone could write it off as the jadedness of adulthood, smearing the naivete of my childhood. That feeling though, when I stepped into the Malay speciality stalls at the edge of city, near the museum of U**O, I knew I was not welcomed in there. And it wasn’t a harmonious feeling.

All sorts of bad feelings and all sorts of complicated thoughts, they soon fade when your nose welcomes a mouthwatering smell at Nancy’s Kitchen, a popular local Nyonya (Peranakan) restaurant. Just remember that their popiah (spring roll) is on first come first serve basis. They sell out when the popiah skin batter runs out. Time is of the essence, when it comes to good food.

The legacy of Melaka of her makers and conquerors is undeniably rich. It is a city when time flowed and reflected the human nature of errors and lies. Funnily enough, parts of those errors and lies became the beautiful heritage that Melakan are proud of. Do wonder what would happen to those farcical forgeries of modern time in this city. Only time can tell.

Facts:
To get to Melaka:
From Singapore: there are many long-distance bus that run this route. Most bus companies operate from City Plaza (near Paya Lebar Station), Golden Mile Centre and Queen Street (near Bugis Station). You can check your options and pre-book your tickets at easybook.com .
One-way trip ticket could cost you from SGD 16-50. It would take you between 3-5 hours, dependent on traffic and immigration.

Misshoggy stayed at Hatten Hotel, as it is one of the arrival bus stops.

Across the TasmanSeptember 4th, 2016
My first, my last, my favourite: New Zealand.

How may I help you?